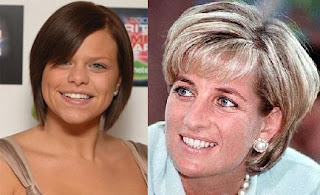 Reality TV character Jade Goody, who sadly died today, is now poised for an assault on the posthumous tabloid records held by the late Diana, Princess of Wales. As Goody’s team plans her challenge we look at the contenders and talk to the key members of their teams for the upcoming season.
Jade Goody "Essex Princess":-
The challenger and posthumously titled "Essex Princess" has had a much shorter career than her more established opponent. A meteoric rise to stardom found her representing Essex on the world stage. Having set new standards for the people of the county to aspire to she took the Essex way of life to a whole new market in India. Her widower, Jack Tweed also showed how to bring curfews and ankle tags from the south of East Angular to living rooms the world over. During a short career she has made the pages of Heat and OK! and shelves full of TV magazines her own, but will it be enough?
"People criticised our preparation for this fight, saying that our planning was wrong – that the tribute edition had gone too early – before she had actually died," said publicist Clifford Billingsworth. "But we have to stick with what we know – photos of her before she lost weight, after she put it back on again and wearing a headscarf, We think the funeral will be big for us."
The team acknowledges that the champion, who has defended her title successfully for a dozen years, has a huge advantage in what many believe is a two horse race.
"Diana is a true competitor, but you know maybe she is a bit past her prime – having died in 1997. We are younger and we think that we can make use of the web and mobile media to flog our filly," said Billingsworth.

Diana, Princess of Wales:-
The undisputed champion of the tabloids, and self styled Princess of Hearts, has been raking in column inches for decades. Such an ever present daily fixture it is difficult to believe that she has been dead for nearly 12 years - and indeed many people don’t. Her team, led by the Daily Express, knows that the "Essex Princess" could give them a run for their money and is not resting on its laurels.
"Goody is a stiff competitor but our girl isn’t dead and buried, according to conspiracy theories we haven’t printed. Yet. We think OK! may have gone early but not all of the stories about Diana being pregnant have been made up. Yet," said Express owner Richard Desmond. "It’s the People’s Princess’s title, and Goody has to wrench it from our cold, dead hands."
The Daily Express – the World’s Greatest newspaper set in 1950 – is so ebullient it is worried about collateral damage.
"If we launch a complete Diana bombardment we can carpet bomb the media," said Desmond. "However we are worried we won’t have space for our usual tirade of racism and kicking the McCanns."

Other players
Professional Wedding Attendee Elton John:-
Elton John was a friend of both Princesses. There has been no comment on rumours that John, famous for both weddings and funerals, will turn his hand to a singing career. Key to tabloid competition, John having headlined Diana’s funeral will mean Goody’s corner will be keen to get the gay stereotype in front of the cameras. Not dead.
Evil fiend Sir Fred Goodwin:-
Could act as a spoiler. Neither a princess, nor popular, he is the newly crowned face of the Credit Crunch and has landed the role of a soap opera villain as a shorthand for thirsty editors who don’t understand the financial crisis. Could rob the main contenders of valuable exposure. And the public of huge amounts of cash. Not dead, yet.
at March 22, 2009