The sister of the phenomenally successful Australian pop goddess, Kylie Minogue, has spoken of the difficulties that she has had asserting her own individuality and holding down relationships.
"As many people with famous family members know it is difficult to live in the shadow of the constant comparison and the unstated insinuation that any success I have is because of my name," said Dannii, coat-tail riding sister of the wonderful Kylie. "In my case that is not just professionally but in my personal life too." 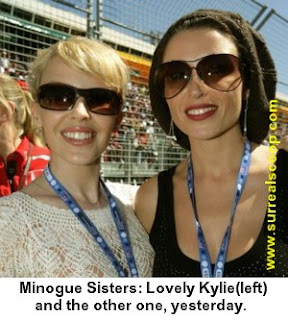 Dannii revealed her thoughts exclusively to readers of both 'Ya! OK?' and 'Wotcha!' magazines during a photo-shoot of her squeezing into some of her sister's stage costumes and posing with a Jason Donovan waxwork.
"Obviously reporters are forever comparing my career to that of my sister," said Kylie's less successful sibling. "But my personal life is strewn with failed romances with men, who I am beginning to think, only wanted to use me to get as close as they can to Kylie."
Dannii, who can be seen on ITV1's X-Factor offering hollow showbiz advice to contestants without a famous and stunning sister, spoke frankly about the effect it has had on her love life.
"It is amazing how many men have a fantasy involving me kneeling and wearing a blonde wig!" said the delectable Kylie's younger (not that you would guess) brunette sister. "And it is getting a little suspicious that during lovemaking men often yell out my sister's name."
As the interview drew to a close, and she hurried to get the last bus home, wotsherface revealed the stunning revelation that a difficult romantic life is a burden to both Minogue sisters.
"Only the other day I got a call from a jet-lagged Kylie on her way to Rio complaining about the same problem - of men's shouts during sex. In her case it is often 'My mates down the pub will never believe me!'"
at November 05, 2007

Email ThisBlogThis!Share to TwitterShare to FacebookShare to Pinterest
Labels: celebrity

Hi Friend! Just passing by and dropping by to say "Congratulations"!!! I don't understand all the words here, but I can see It's great blog... nice work... and I love Kylie Minogue. Sorry! My English is not very good. It's only from American Music. Keep up the good work friend! All The Best! Take care and GOD bless You! Your Brazilian Friend from Blogging to Fame, Renato de Trindade
(FAMED IT and FAMED YOU)
GOOD LUCK!!!