George W. Bush today underwent a minor medical procedure to ensure all traces of Tony Blair have been removed from the President’s colon.
"The President was advised by his doctors several years ago that he should have a check-up to ensure that when Mr Blair left his office, as Prime Minister, there were no cancerous traces in Mr Bush’s colon," explained White House spokesman Scott Billingsworthski.
Following the 11th September terrorist attacks on the US, Tony Blair insinuated himself deeply into the President’s inner circle. It was the depth of this special relationship that raised concerns with George Bush’s doctors about the impact on his colon. 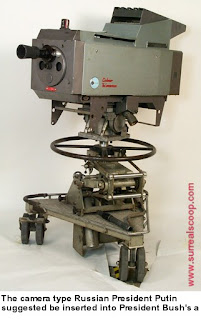 Downing Street sent its best wishes but denied that there had been any Brown / Bush contact over the President’s alimentary canal. It is understood the White House received a message from the people of Iraq suggesting that President Bush receive a really thorough probing at least twice.
Vice President Dick Cheney briefly gripped the reigns of power whilst Mr Bush was having the camera inserted.
"The President is always pleased to have Dick to fall back on," said Mr Billingsworthski.
Mr Bush’s medical team used the latest in miniature camera technology to reduce discomfort and declined an offer from Russian President, Vladmir Putin, of one of their outside broadcast camera trolleys.
at July 21, 2007