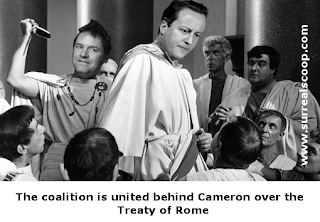 David “Caesar” Cameron today revealed his intention to desperately assert his role in the centuries old conflict over the future of Europe within the Conservative Party.

“It's time to ask important questions about the Treaty of Rome, some say we should be fearful of asking, “ said Caesar. “But cowards die many times before their deaths. The valiant never taste of death but once.”

Caesar laid out his plans for a referendum on whether the Conservative Party should openly rebel against his leadership or simply continue to tear itself apart leading to the eventual end of his career just as it had his predecessors.

“I am constant as the Northern Star,” explained Cameron with the Conservation Party united directly behind him as he urged for a referendum on Britain's relationship with other countries, “Get going! Run to your houses, fall on your knees, Pray to the gods to stop the Hague!”

Unfortunately, a party soothsayer lamented that Caesar's fate is sealed in the stars because neither the Tories themselves, nor the other member states, could ever agree on a role for Britain within the EU.

“Those hard hearts and the cruel men of Rome will prevent Caesar continuing to act into the fifth year of the next parliament,” said the sage. “He will of course be stabbed in the back at the beginning of the third year. His political epitaph is likely to be 'Et tu Boris?'.”
at January 23, 2013