The historically peaceful nation of Great Britain today reacted with great surprise as it became apparent that one of their “army” of professional soldiers may have injured an enemy on the battlefield. 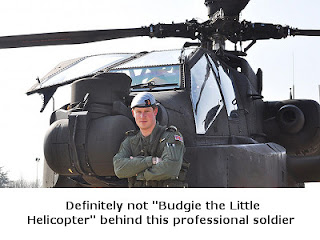 “He seemed like such a nice you man, standing there next to his brother at the wedding, wearing that lovely Blues and Royals uniform,” said Edna Billingsworth. “I had no idea that was a military outfit. And they train to kill people you say?”

Mrs Billingsworth was reacting to an interview with a serving army officer, Captain Wales of the Army Air Corps, who explained that after several years of training to kill people, being trained how to use £30m machines of death and having been deployed into battlefield service in a live, decade long, shooting war, that he had been actively attempting to kill the enemy.

“It's not really what I expect of a soldier, least of all one that knows that lovely Kate so well and has such a wonderful brother in William. Such a lovely couple,” said Mrs Billingsworth. “And I saw a picture of the helichopper that he flies, it's very ugly isn't it? That won't look very nice on a tea towel. Can't he fly that nice budgie that his auntie wrote about?”

However the incredulity is not just shared by commenters on the Daily Mail website, it is shared by other members of the lunatic fringe too.

“We've always wanted to bring down the UK establishment and of course the Royals,” said a spokesman for a radical Muslim group in East London. “The fact that these serving soldiers have killed our martyrs just makes this parasitic leach of an infidel more of a target for us. But not on a Tuesday as I have to sign on at the job centre then.”
at January 23, 2013