Outbreak of “Bluetongue” in 10 Downing Street

The Prime Minister has confirmed rumours of another outbreak of the disease Bluetongue, this time within central London and believed to be the centred on Whitehall.
“There has been a number of instances that have been identified in the press as being cases of Bluetongue,” said Gordon Brown from within the exclusion zone within Downing Street. “Jack Straw's most recent announcement regarding so called 'Have a go heroes' is the latest such policy outbreak.”
The government has come under fire for not protecting the country from this deadly contagion, a disease that can lead to a foaming of the mouth and cause the afflicted to produce large amounts of bile and venom. This can manifest itself as a 'Blue Rage' targeted at the weaker members of societal groups, such as those from different cultural backgrounds.
“The last big outbreak was in the '80s when most of the country was afflicted by a virulent outbreak of Bluetongue that originated in the town of Grantham and spread nationwide via Downing Street and Westminster,” said historian Gerald Billingsworth. “Those most at risk were the weaker and poorer areas of society, such as the mining and manufacturing communities.”
It had been thought that not only had the disease been eradicated from Britain but that the scenes of widespread devastation caused by the rampages across the land of those most severely afflicted had inoculated the country against future infections. 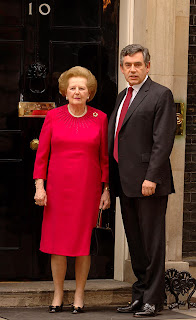 “The lessons learnt from the last outbreak seemed to have prevented any further cases over the last decade,” explained Mr Billingsworth. “After a great deal of pain the country was finally able to be rid of the scourge of Bluetongue when the carriers failed with a policy of inert 'Back to Basics' treatment that ended up with them succumbing to a series of foot 'n mouth outbreaks. The papers of the time often carried distressing pictures of the sufferers, and their secretaries, on their backs with their legs in the air.”
The government has denied that this most recent outbreak occurred when a Bluetongue carrier, thought to be a disease ridden old cow, was recently taken to lunch at Downing Street.
at September 30, 2007

Further reports, 4 suspects are on the run and last seen in Las Vegas, Nevada.
Their composite drawings can be found here....
Blue Tongue Composite