Dolphins suffer from PMT too

Marine Biologists at the world famous Ben Nevis Sea Life Centre have announced startling new research that indicates that dolphins suffer from Pre-Menstrual Tension just as much as humans.
"We have analysed the behaviour of marine mammals including our dolphins for some time, however the breakthrough came with translation of their complicated clicks and whistles," explained Dr Phillippa Billingsworth at the launch of the study, entitled 'I'm Tense and Porpoise'.
The study found that the intelligent marine mammals exhibited heightened tension and irritability that was synchronised to the phases of the moon. The dolphins would often informally segregate by sex and their communications reveal the tensions within the pod. 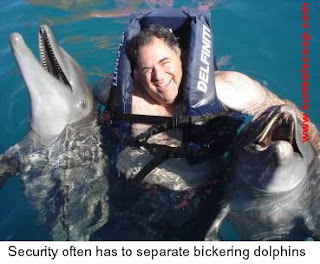 "All of the members of the pod suffer from PMT, the males as much as the females as it seems they cop the fallout," explained Dr Billingsworth. "Just like with humans."
The transcripts of the dolphin's underwater exchanges hint at this tension and the steps to which the male dolphins are sympathetic but confused by the behaviour of their mates. In one exchange a male dolphin appears to lament to another that "I have no idea, I simply made an encouraging whistle at the young female who was practising her leaps this morning and the missus starts clicking on about how her mother warned about me before we were caught."
In another exchange one of the males is concerned that his mate may be suffering from some sort of mental problem, he says, "She is going nuts mate. She was whistling like a mad thing during feeding this morning. I tried to explain that the reason we spend Christmas with my family is that we were all captured together and hers are still free. She just said that the killer whale in the other tank would be able to jump the sea gate and then she swam off to get her flippers waxed."
"It seems the males are at a loss as to how to react to the females, so when they sense the onset of PMT they try to keep out of their way," said Phillippa. "In one exchange a harassed male says to another member of the pod 'Quick, lets get down to the shallow end and look busy, otherwise the missus will have me jumping through hoops all afternoon.'"
at September 27, 2007

Email ThisBlogThis!Share to TwitterShare to FacebookShare to Pinterest
Labels: environment