“Muhammad” Teddy Bear to be flogged

The teddy bear that was previously named Muhammad by schoolchildren was today sentenced by judges in Khartoum for its part in the controversy that led to the imprisonment of English schoolteacher Gillian Gibbons.
“We take any insults to our religion very seriously, ” said Ali Billing-Laden an Islamic scholar who gave evidence at the bear's hearing. “Once again the west has insulted the Great Prophet, peace be upon him, and this will no longer be tolerated.” 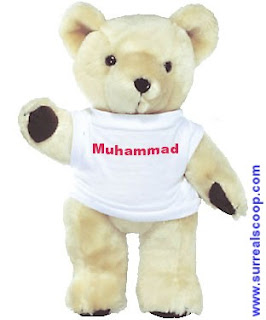 The bear, formerly known as Muhammad, has been sentenced to be flogged on ‘eBay Sudan’, with no expectation of a reserve. Postage and packing has been set at a stinging £400 however the bear is likely to be simply placed in a cardboard box and lashed with bubble wrap.
A statement from the Unity High School in Sudan, where Ms Gibbons worked, said that there had never been any complaints over other toys that have been named by the children.
“Those are completely different to this insult,” said Ali Billing-Laden. “Why should anyone complain about ‘Jesus the Monkey’, who clings onto a piece of wood? The children love their little robotic ‘stars and stripes’ pig called ‘Infidel’ that wallows in its own filth.”
The Sudanese government denied its decision to flog the teddy bear, previously known as Muhammad, was cruel or malicious.
“It's better that the punishment is a short 15 day auction than spending months gathering dust in an Oxfam shop,” said Billing-Laden. “This way it is all over and done with quickly and the bear can be forced into the loving arms of a young jihadi.”
Feelings are running high in Sudan’s capital Khartoum with protests on the streets, determined to ensure that true Islamic law is followed in the case of the Teddy Bear Formerly Known as Muhammad.
“This issue over the bear must be resolved through a strict application of Sharia law and Islamic culture,” said Mr Billing-Laden. “Once it has been flogged on eBay, it shall be stuffed with explosives and set unto its glorious mission at the Infidel ‘Disney Store’. Only then can it attain martyrdom, ascend to paradise and receive 72 virgin Care Bears.”
at December 04, 2007

What happene dto the bear in the end? I want to know.